Effects of targeted therapies on bone in rheumatic and musculoskeletal diseases

Inflammatory rheumatic and musculoskeletal diseases (RMDs) include rheumatoid arthritis (RA), spondyloarthritis (SpA; peripheral SpA as well as ankylosing spondylitis (AS)) and psoriatic arthritis (PsA). These conditions have been associated with both generalized osteoporosis (weakening of the bones) and fragility fractures, as well as erosions (localised inflammatory bone resorption) and/or pathological bone formation.

Treatment for inflammatory RMDs can involve biologic disease modifying anti-rheumatic drugs (bDMARDs) and targeted synthetic DMARDs (such as Janus kinase (JAK) inhibitors). The effect of these targeted treatments on bone formation in axial spondyloarthritis (axSpA) is not well understood. This article presents the most important mechanisms involved in pathological bone metabolism in RA and SpA, including AS.

What effect do targeted therapies have on bone in RMDs?

· Research indicates that new bone formation might be more effectively controlled by bDMARDs including tumour necrosis factor (TNF) and IL-17 inhibitors in the early, inflammatory stages of AS with no definitive radiographic damage of the sacroiliac joints. This suggests that new bone formation is mostly driven by local inflammation, and again highlights the importance of earlier diagnosis in axSpA.
· Osteoporosis can occur as a result of having AS, known as secondary osteoporosis. This is reported to be successfully treated with bDMARDs such as anti-TNF therapies, which slows the generalised bone loss and also prevents further loss to bone mineral density.
· No studies on the effects of IL-17 and IL-23 inhibitors on osteoporosis associated with RMDs exist, and very few studies exist on JAK inhibitors. It has been suggested that JAK inhibitors may stop bone loss and promote bone formation, therefore more clinical data are needed to determine the effects of JAK inhibitors, and bDMARDs other than TNF inhibitors.
· People with SpA are also at higher risk of fragility fractures, but very few studies have assessed the success of targeted therapies for the prevention of fragility fractures.
· In one study of people with AS, treatment with etanercept increased bone mineral density, however the number of people with vertebral fractures and the severity of fractures increased, as did radiographic progression in the spine. Another study showed that anti-TNF treatment improved bone mineral density but did not affect rates of vertebral fractures in axSpA.
· More clinical trials using fragility fractures need to be conducted in inflammatory RMDs to understand more about how it can be treated.

What key mechanisms are thought to be involved in RMD bone formation and bone loss? (This is where things get a bit technical!)

As outlined in the above article, spinal bridging syndesmophytes can be a hallmark of ankylosing spondylitis, the radiographic form of axSpA (r-axSpA). The fusion of two vertebrae may occur when a syndesmophyte has crossed the intervertebral disc space and formed a so-called bridging syndesmophyte to the adjacent vertebra. This most commonly occurs in the annulus fibrosis of the vertebral body and adjacent ligaments (see below image), but can also occur at the facet joints. 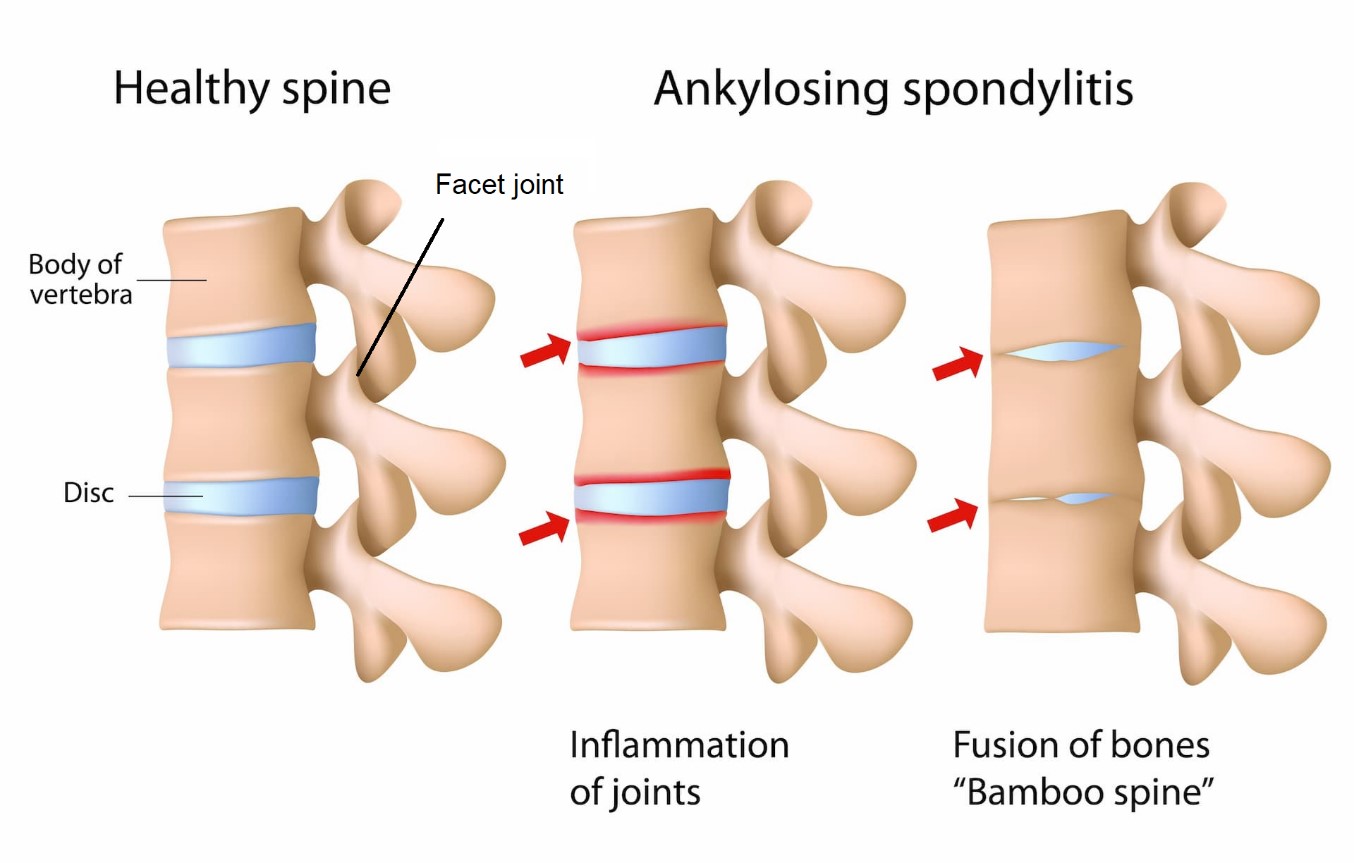 Facet joint ankylosis (joint stiffening/ immobility due to fusion of the bones) has also been reported in people with r-axSpA. As the facet joints are synovial joints (freely movable), inflammation may be present for prolonged periods before ankylosis is detectable, causing ongoing structural damage. This resulting structural damage is best assessed using computed tomography (CT) scanning.

In this week’s study by Slobodin and colleagues, the authors retrospectively assessed the facet joints of 49 people with different forms of axSpA: 16 with r-axSpA and intervertebral syndesmophytes, 22 with r-axSpA without intervertebral syndesmophytes, and 11 with non-radiographic axSpA (nr-axSpA). A control group including 44 people without a diagnosis of axSpA, matched to the study group by age and gender, was also included.

The assessment of CT images was performed by an experienced rheumatologist (17 years of CT reading experience) and a musculoskeletal radiologist (21 years of CT reading experience), who were both unaware of the diagnoses when presented with the CT images. Images included the cervical, thoracic, and lumbar spine, and were categorised under the following:
· “Normal”,
· Disease-specific changes (ankylosis, erosion),
· Degenerative changes (narrowing, osteophytes, sclerosis, cysts, vacuum) 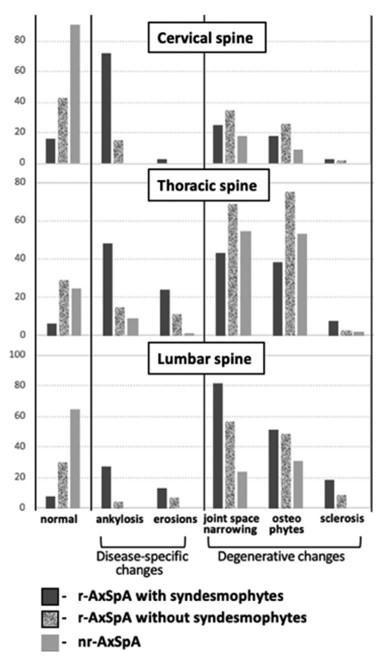 The key points from the article are summarised below:

· Facet joint ankylosis and syndesmophytes were significantly more prevalent in all spinal segments of people with r-axSpA.
· Facet joint erosions were seen almost exclusively in people with r-axSpA.
· Facet joint-space narrowing and osteophytes (degenerative changes) were noted in all segments and all subgroups of axSpA, including those with nr-axSpA.
· Of interest, the least mobile area of the spine, its thoracic segment, was a major location of facet joint disease in all people with axSpA, including those with nr-axSpA.
· Facet joint-space narrowing and osteophyte formation were significantly more common in the thoracic spine of people with axSpA versus the control group; possibly reflecting axSpA disease-mediated facet joint inflammation or altered biomechanics of the spine.
· It is important to interpret these study results with caution due to the retrospective nature of the examination and the small number of people included in the study, as well as no comparison of male and females.

Do you have experience of facet joint inflammation, or facet joint disease? Would you like to share your experience? If so, feel free to email me on ns2271@bath.ac.uk

Syndesmophytes are bone growths occurring inside a ligament, most commonly occuring in the annulus fibrosis (of the vertebral body) and adjacent ligaments. As seen in the previous article summary, bone formation can also occur in facet joints, causing facet joint ankylosis (FJA). However, the direction of the association between FJA and (bridging) syndesmophytes is unclear. Some evidence suggests that bridging syndesmophytes occur frequently with FJA in radiographic axial spondyloarthritis (r-axSpA), whereas other evidence suggests syndesmophyte development precedes FJA. Syndesmophytes have been reported to frequently occur and progress most in the thoracic spine.

This study examined the thoracic spine using low dose Computed Tomography (ldCT), which was used due to its ability to repeatedly capture images of the whole spine. There were two aims of the study; to examine whether:

51 people with r-axSpA (average age 49 years, 86% male) diagnosed using the 1984 modified New-York classification criteria were included in the study. LdCT and Magnetic Resonance Imaging (MRI) images of the whole spine were collected at the start of the study (baseline) and two years later.

I hope you have enjoyed reading these summaries of research, and found the information useful.

If you want to share your experience of any issues related to this blog, please contact me on: ns2271@bath.ac.uk. I would love to hear from you!