I hope that you are all having a lovely weekend (or as much as it can be at the moment!). Some exciting news this week – a new drug called Upadacitinib has been approved by the European Medicines Agency (EMA), for use in Ankylosing Spondylitis (AS, radiographic axial spondyloarthritis – where changes can be seen on X-ray). It is the first oral (in tablet form), to be taken regularly once a day, JAK inhibitor approved for three different adult rheumatic conditions in the European Union: rheumatoid arthritis (RA), psoriatic arthritis (PsA) and AS.

In light of this exciting news, we thought that it would be interesting to provide some more information about this novel drug below. We hope that you find it useful!

Enjoy the rest of the weekend. 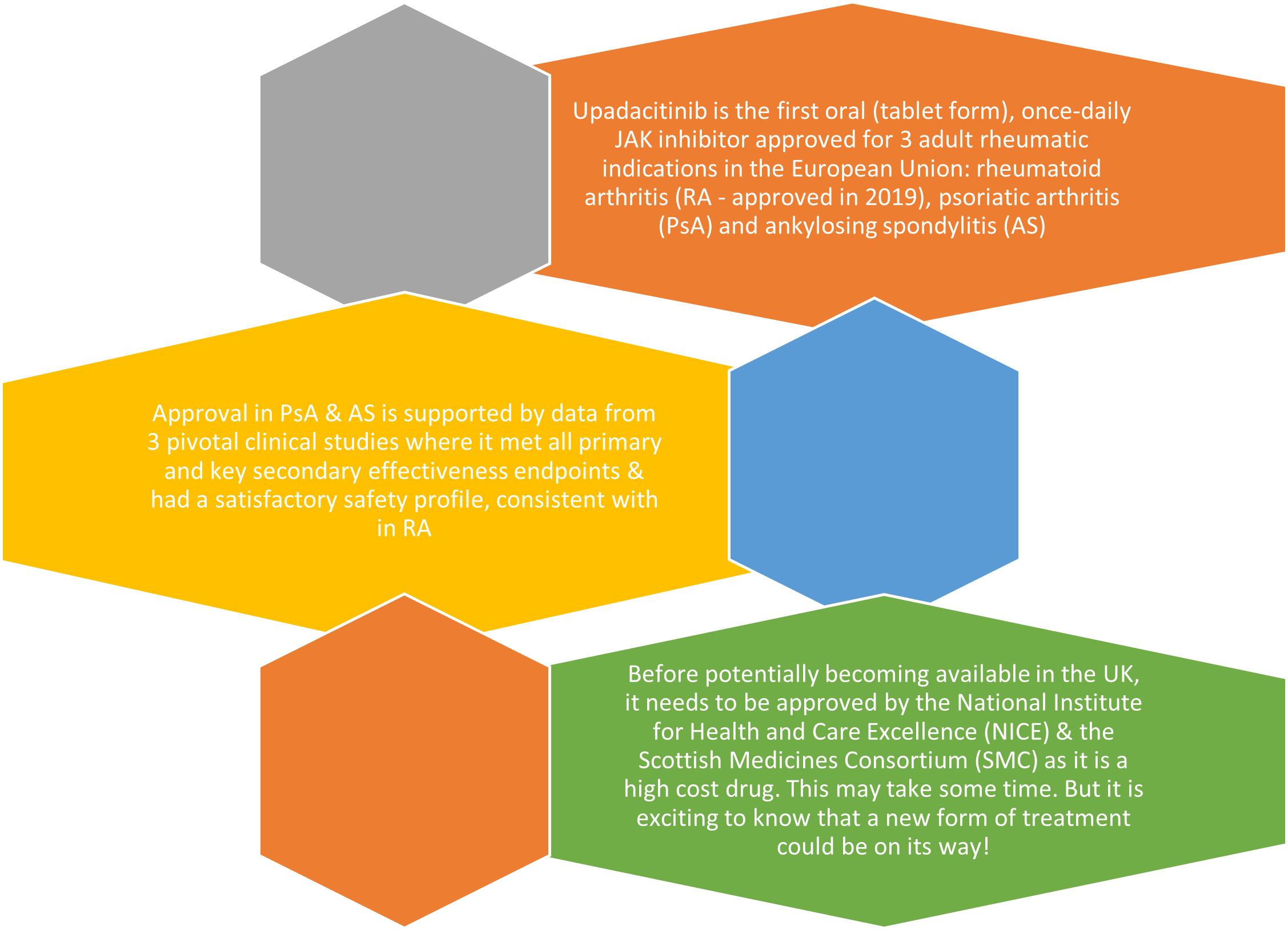 What is Upadacitinib and how does it work?

Upadacitinib is a new form of drug, called a Janus Kinase inhibitor – or JAK inhibitor for short. The EU and U.S. approved Upadacitinib in 2019 under the brand name Rinvoq to treat moderate-to-severe active rheumatoid arthritis (RA).

JAK inhibitors target JAK enzymes. These enzymes are found inside cells and are involved in the signalling of a group of molecules known as cytokines. Cytokines are secreted by immune cells that influence immune or inflammatory responses. You may already be aware of one cytokine in particular - tumour necrosis factor alpha (TNFα) – whose signalling is blocked by anti-TNF medication such as adalimumab (known as Humira, Amgevita, Hulio, Hyrimoz, Idacio, Imraldi), certolizumab pegol (Cimzia), etanercept (Enbrel, Benepali, Erelzi), golimumab (Simponi) and infliximab (Remicade, Remsima, Inflectra).

There are 4 known types of JAK enzyme, each with distinct biological roles. For example, JAK2 plays a key role in the development of red blood cells, platelets, and myeloid cells. Meanwhile, JAK1 regulates several pro-inflammatory cytokines. Upadacitinib targets JAK1 specifically. Thereby inhibiting pro-inflammatory pathways while minimising impact on important JAK2-dependent processes such as production of red blood cells and platelets. It is therefore suggested to have an improved benefit–risk profile compared with other less selective JAK inhibitors.

How do we know that it is safe?

In the clinical trial SELECT-AXIS 1, including 187 patients with AS, Serious Adverse Events (SAEs - defined in medical trials as any untoward serious medical event: https://www.fda.gov/safety/reporting-serious-problems-fda/what-serious-adverse-event) were reported in just 1% of the patients in both the Upadacitinib and placebo group. No serious infections, cancers, blood clots, or deaths were reported.

The most common adverse events reported with Upadacitinib included blood CPK increase (very high CPK level most often means that there has been stress to muscle tissue, the heart, or the brain), diarrhea, nasopharyngitis, headache and nausea. During hospitalisation for adverse events (distinct from SAEs), no significant findings were obtained (including normal CPK values), and the patients were discharged in good condition. These findings are consistent with those clinical trials for RA and PsA also, with no new significant safety risks identified.

What evidence is there for its effectiveness in AS?

In SELECT-AXIS 1, Upadacitinib met the primary endpoint of Assessment of Spondyloarthritis International Society (ASAS) 40 response at week 14 versus placebo. ASAS40 requires an improvement of at least 40% and an absolute improvement of at least 1 unit (on a 0-10 scale) in at least three of four of the below domains, with no worsening of the remaining domain:

Upadacitinib also achieved statistical significance across several key secondary endpoints versus placebo, including ASAS partial remission at week 14 and Bath Ankylosing Spondylitis Disease Activity Index (BASDAI) 50 (50% reduction in BASDAI) at week 14. ASAS partial remission indicates very low disease activity - a value of 2 (on a 0 to 10 scale) present in each of the above 4 domains.

What does this approval mean?

Approval by the EMA essentially means that the drug is now licensed across most European countries, including the UK. This means that the EMA has rigorously reviewed all clinical research on the drug and are satisfied that it is effective, safe and meets manufacturing quality standards.

Before potentially becoming available for use in the UK, it still needs to be approved/appraised by the National Institute for Health and Care Excellence (NICE), the Scottish Medicines Consortium (SMC), and potentially the All Wales Medicines Strategy Group (AWMSG) or Department of Health in Northern Ireland. These groups will decide if it should be used in the UK and whether there should be restrictions on its use. For example, anti-TNF medication can only be used in people who have severe axial spondyloarthritis (severe axSpA, including severe AS) who have tried non-steroidal anti-inflammatory drugs (NSAIDs), but NSAIDs have not worked: https://www.nice.org.uk/guidance/ta383.

These various approvals processes may take some time. But it is exciting to know that a new form of treatment could be on its way. And has been deemed safe and effective for AS by the EMA!

A quick note
In future, for newer drugs, the approvals process is due to change slightly for the UK due to BREXIT. Licensing decisions for the UK will be transferred from the EMA to the UK Medicines and Healthcare products Regulatory Agency (MHRA). However, for a period of 2 years following 1st January 2021, the UK are to continue to adopt decisions taken by the European Commission on the approval of new marketing authorisations. Hence the EMA approval of Upadacitinib still applying to the UK!