Special supplement within the journal “Rheumatology”

Hi everyone – if you are new to the blog, then welcome! I hope that everyone is keeping well during these strange times.

In rather exciting news, this month’s addition of Rheumatology (Oxford University Press) had a special supplement addition specifically regarding axial spondyloarthritis (axSpA). The aim of this edition is to provide a comprehensive overview of axSpA for clinical rheumatologists and general physicians. Such educational tools/ research updates will hopefully be critical in raising awareness of axSpA and helping to reduce the delay to diagnosis.

You can find a link to the supplement here (https://academic.oup.com/rheumatology/issue/59/Supplement_4 - all Open Access), and we have provided a contents section and brief overview/ abstract section at the end of this blog post. We hope that you that find them useful! As you will see, excitingly members of the Project Nightingale team were invited to write an article for the supplement specifically regarding the delay to diagnosis in axSpA – the link to the article is here: https://doi.org/10.1093/rheumatology/keaa472. [To note: unfortunately, at the publishing stage, the publishers made an error with our publication, whereby there is a minor typo in the abstract, and unfortunately the figures are ordered incorrectly (figure 2 and 3 should be figure 2a and 2b). Therefore, our final summary figure has unfortunately been missed out. This is currently being rectified by the publishers, but apologies if you see the article before these corrections have been made!]

As always, if you are interested in Project Nightingale and would like to get in touch, please email Rosie at rosie.barnett1@nhs.net, and she will be happy to discuss with you. If you are on twitter, you can also follow **https://twitter.com/RosieBarnett95 **for regular research and Project Nightingale updates, including notifications for new blog posts!

Thank you for reading and have a good rest of the weekend everyone!

The last two decades have seen major advances in the understanding of axial spondyloarthritis (axSpA). Despite being one of the oldest diseases known to man, with human skeletons showing evidence of radiographic axSpA (r-axSpA) or ankylosing spondylitis (AS) dating back to ancient Egypt, axSpA remains, to date, a challenge to researchers, particularly in its non-radiographic (nr-axSpA) form. This is largely related to the variability of outcome seen with some individuals having a ‘benign’ disease course with no significant symptoms or disease progression allowing for self-management, while others develop irreversible structural damage of the sacroiliac joints or even the spine, with the consequent loss of functional capacity and decreased quality of life, often early in the disease course. The latter, thought to represent an early, pre-radiographic sub-group is well characterized as a young, predominantly male population, HLA-B27 +ve and often presenting with MRI-related bone oedema. However, there is significant variation in nr-axSpA. This issue of Rheumatology aims to appraise the literature in the understanding of the different disease subsets within the axSpA spectrum, it discusses the ongoing challenges in diagnosis, the impact of sex and co-morbidities, and summarises recent findings in pathogenesis (how the disease develops) and treatment strategies.

In this paper, Dr Marzo-Ortega and colleagues provide a detailed insight into axSpA as a disease spectrum, with key messages outlined below:

You may remember that we have provided some detail on axSpA as a disease spectrum in one of our prior blog posts also (please click here if you are interested: https://www.projectnightingale.org/blogs/axial-spondyloarthritis-what-is-axspa-and-how-does-it-relate-to-ankylosing-spondylitis/). The term ‘ankylosing spondylitis’ is used to describe axSpA when clear structural changes can be seen on an x-ray; meanwhile ‘nr-axSpA’ can be used to describe axSpA whereby clear structural changes are not found on an x-ray, but instead may be diagnosed from other clinical features and potentially magnetic resonance imaging (MRI) results. While we are still unsure regarding the natural history of axSpA, it is clear that not all people with nr-axSpA go on to develop structural changes detectable by x-ray. However, it is worth noting that the people more likely to progress radiographically may be smokers, male, HLA-B27 positive, and have higher baseline levels of structural changes or CRP/ESR (see 2018 review by Sari & Haroon for details: https://link.springer.com/article/10.1007%2Fs11926-018-0795-4). As outlined by Dr Marzo-Ortega and colleagues, it is important to note that the cut-off between nr-axSpA and AS is arbitrary, and burden of disease can be similar for both people with nr-axSpA and people with AS.

Axial spondyloarthritis 10 years on: still looking for the lost tribe

Despite the publication of various recommendations, quality standards and referral strategies to promote early diagnosis in axial SpA (axSpA) over the last decade, there remains a significant delay to diagnosis, leading to a lost tribe of undiagnosed, untreated patients with persistent back pain and axSpA symptoms. In this review, we discuss the various factors contributing to diagnostic delay in axSpA, while providing recommendations to improve the diagnostic pathway. For example, use of the online Spondyloarthritis Diagnosis Evaluation (SPADE) tool (http://www.spadetool.co.uk/). Significant shortcomings exist at both the primary and secondary care level, with healthcare professionals often lacking sufficient knowledge and awareness of axSpA. Myths regarding the classical signs and symptoms still prevail, including the perception of axSpA as a male disease, only occurring in individuals who are HLA-B27 positive with raised inflammatory markers. Individuals within this lost tribe of undiagnosed patients are likely lacking adequate treatment and are thereby at risk of worse clinical outcomes. It is therefore vital that public health initiatives are implemented to improve education of healthcare professionals and to ensure early specialist referral, to ultimately improve the lives of patients with axSpA. 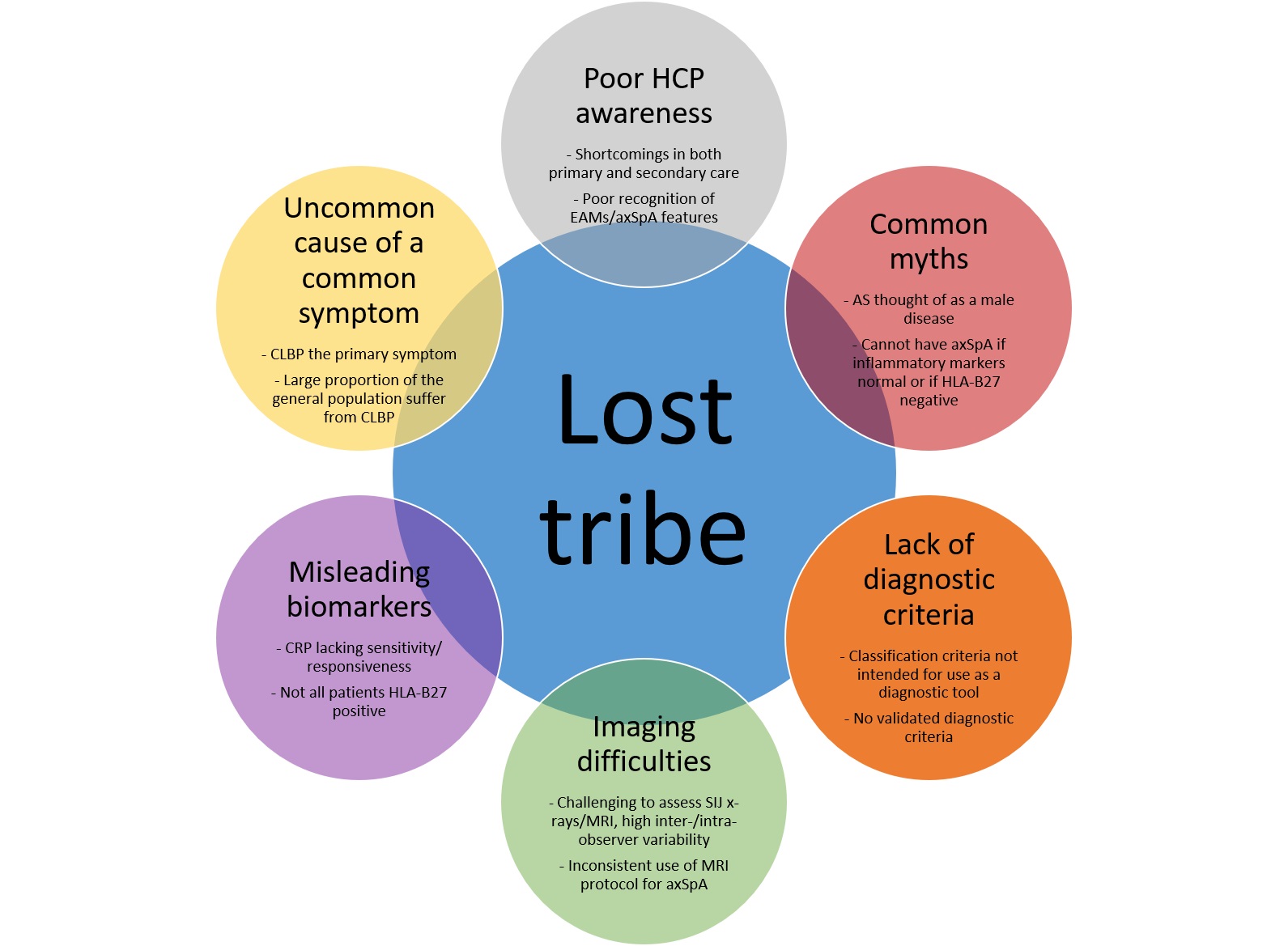 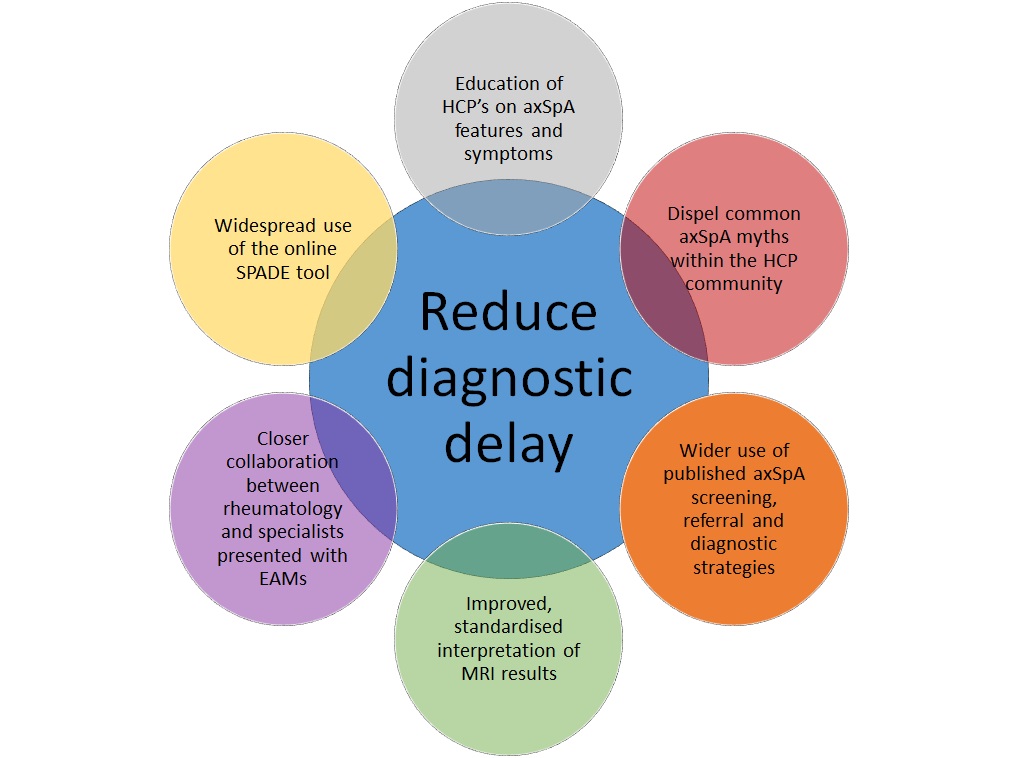 Sex and gender differences in axial spondyloarthritis: myths and truths

Mounting evidence reveals evident sex differences in physiology, disease presentation and response to medication in axial SpA (axSpA). Unfortunately, these data are often neglected in clinical practice and research. In this review, myths that still exist on diagnosis, disease manifestation and drug effectiveness were argued against data of the most recent literature. Physiological differences in genes, immune modulation, pain mechanisms and body composition are also discussed in the context of axSpA. The aim is to increase awareness of sex differences in the clinical aspects of axSpA.

Prevalence and impact of comorbidities in axial spondyloarthritis: systematic review and meta-analysis

Comorbidities are common in people with axial spondyloarthritis (axSpA). In this systematic review of the literature, the authors aimed to: (i) describe the prevalence of commonly reported comorbidities, (ii) compare comorbidities between axSpA and control populations, and (iii) examine the impact of comorbidity burden on axSpA outcomes.

Genetics and the axial spondyloarthritis spectrum

The axial SpAs (axSpAs) are a heterogeneous set of diseases with variation in presenting features between each individual. These diseases are all highly heritable and have overlapping but differing genetic origins (for example for Ankylosing Spondylitis versus non-radiographic SpA). These similarities and differences are of great interest in regards to disease pathogenesis and treatment development, although individually they are too small in effect to be of prognostic (predicting the course of the condition) or diagnostic value. Polygenic risk scores, which capture a high proportion of the genetic variation between disorders, have been shown to have clinically useful discriminatory capacity in axSpA. This suggests they have the potential to enable improved disease classification, to ultimately benefit clinical care. The aim of this article is to review the genetic characteristics of the spectrum of axSpAs and to discuss how this influences our understanding of the development of the disease and the clinical implications of this understanding.

Classification vs diagnostic criteria: the challenge of diagnosing axial spondyloarthritis

As touched upon in the above articles, although significant progress has been made in improving the early diagnosis of spondyloarthritis (SpA), including axial SpA, there are still issues related to the application of classification criteria for making the primary diagnosis of SpA in the daily practice. There are substantial differences between the diagnostic vs classification approach. The primary objective of classification criteria is to identify a homogeneous population for clinical trials and research, whereby patients are similar in terms of clinical characteristics, and should therefore not be used for diagnostic purposes. Although it is not possible to develop true diagnostic criteria for natural reasons as discussed in this review, the main principles of the diagnostic approach can be clearly defined: consider the pre-test probability of the disease, evaluate positive and negative results of the diagnostic test, exclude other entities, and estimate the probability of the disease at the end.

Treatment strategies in axial spondyloarthritis: what, when and how?

There have been major advances in the management of axial spondyloarthritis (axSpA) with the introduction of effective biologic agents targeting TNF and IL-17A (cell signalling proteins known as cytokines, involved in systemic inflammation). Clinicians now have more choice but, despite treatment recommendations, are still faced with significant uncertainty when deciding on the optimal treatment strategy for an individual patient in clinical practice.

Optimal management of axSpA typically requires both non-pharmacological and pharmacological interventions. NSAIDs remain the first line drug therapies for axSpA with proven efficacy for symptomatic management. However, uncertainty remains regarding their optimal long-term use relating to radiographic progression and safety in axSpA. To-date there are no head-to-head trials of biologics in axSpA. Clinicians need to consider other factors, including extra-articular manifestations, comorbidities, safety and radiographic progression when deciding on which biologic to recommend for an individual patient. This article explores the evidence relating to these factors and highlights areas of unmet need.

- Non-pharmacological strategies involve mainly exercise therapies, education, lifestyle and behavioural changes and self-management. Exercise remains the cornerstone in the treatment of axSpA. In addition to improving many axSpA outcomes, including disease activity, pain, spinal mobility and function, regular exercise has significantly lower cost and fewer adverse effects compared with NSAIDs or biologics, with additional benefits for general health and well-being. The optimal intensity and format of exercise in axSpA remains unclear, with current evidence favouring a combination of endurance and strength training. It is unlikely that there will be a single exercise regimen suitable for all people with axSpA, so a more personalized approach is required, with the type and intensity of the exercise adapted to the patient’s demographics, preferences, comorbidities and disease severity.

- The current licensed drug treatments for axSpA are NSAIDs and biologic DMARDs (bDMARDs) targeting TNF or IL-17A, which in general appear to have similar clinical efficacy in AS and non-radiographic axSpA. JAK inhibitors are a promising therapeutic modality for axSpA, with several phase 3 clinical trials underway. Observational data indicate that, generally, HLA-B27 positivity, younger age, shorter disease duration, male gender, elevated CRP and inflammatory MRI features are associated with higher response rates to TNF inhibitors in axSpA, while obesity and smoking are associated with lower response rates. These factors are not entirely surprising; the predictors of ‘good response’ essentially reflect a higher likelihood of the patient truly having active inflammatory axSpA, as opposed to other causes of back pain such as degenerative disc disease or fibromyalgia, which are unlikely to respond to biologics and which require different management strategies. 3. Extra-articular manifestations and comorbidities can help inform biologic choice in axSpA. 4. Early treatment is associated with better clinical response but evidence for reduced radiographic progression is still awaited.