Hi everyone, I hope you have all had a good weekend! Below is a summary of some of October’s research highlights, including the development of ASAS quality standards to improve the quality of health and care services for people with axial spondyloarthritis (axSpA), further discussions around the axSpA spectrum, and the role of imaging in diagnosis and management of axSpA. It was great to see two articles discussing the importance of sleep in axSpA; in addition to empowering people through self-management and education being highlighted within the 5 of the key priority areas to help improve quality of health and care in axSpA.

Have you read any interesting articles last month that we have missed, and you think should be included here? If so, please get in touch at rosie.barnett1@nhs.net and we can add them to our page.

It has previously been estimated that irritable bowel disease (IBD) affects approximately 5-10% of people with axSpA; with approximately 50-60% of people with axSpA estimated to display microscopic gut inflammation, not necessarily related to gut symptoms. Despite this, over 50% of people with ankylosing spondylitis specifically have reported frequent gut pain/ diarrhoea; with the same study reporting no significant relationship between use of non-steroidal anti-inflammatory drugs (NSAIDs) and gut symptoms. This therefore calls for investigation, and recently there has been increased interested in the potential role of the gut microbiome in axSpA. The present study added to this wealth of evidence reporting a link between spondylarthritis and IBD; reporting that 30% of participants with axSpA without known IBD reported symptoms meeting IBS criteria – a proportion twice that of matched controls and four times higher than comorbid IBD estimates. This relationship remained when adjusting for NSAID use. Furthermore, all reported outcomes, including measures of disease activity, pain and fatigue, were significantly worse among participants reporting IBS symptoms. IBS symptoms were also more common in females, and in participants with fibromyalgia. The authors concluded that IBS may be an overlooked, frequent comorbidity in axSpA, warranting further research and increased awareness to enable better treatments.

As discussed in previous blog posts, historically, x-ray radiographs have played a big part in the diagnosis of axSpA. However, interest in more advanced imaging is now growing exponentially, in an attempt to tackle the challenges clinicians currently face when evaluating and managing people experiencing back pain. Experiences of back pain are common within the general population, and it can be tricky to assess symptoms that lack specificity with regards to cause. In terms of axSpA diagnosis, as you are probably aware, there are other clinical features that are considered, for example potential family history, testing for HLA-B27 proteins, assessment of CRP, and evidence of a change in the pelvic region known as sacroiliitis, identified on x-ray or MRI (inflammation of one or both of the sacroiliac joints, which can cause pain in the buttocks or lower back, and can extend down one or both legs).

However, x-rays are insensitive to change and progression in axSpA is often slow (measured over the course of several years), limiting the evaluation of potential disease-modifying therapies for axSpA in previous clinical trials. An interest in advanced imaging is therefore of great interest and with the ever-expanding repertoire of highly effective agents for treatment, there is an emphasis on reducing the delay to diagnosis, to provide opportunity for earlier, effective and sustained control of disease and potential prevention of long-term structural damage. CT and MRI have increased their potential for use in clinical practice, in addition to providing high image resolution for detecting earlier spinal changes. The following review gave a deep-dive into these new developments in MRI and CT and how these could be applied in clinical practice. These several key points were made:

Development of ASAS quality standards to improve the quality of health and care services for patients with axial spondyloarthritis. Journal article published in BMJ Annals of the Rheumatic Diseases, 11th October. Uta Kiltz and colleagues. https://ard.bmj.com/content/early/2019/10/30/annrheumdis-2019-216034.long#ref-2

This month, excitingly the Assessment of SpondyloArthritis International Society (ASAS) have published a set of quality standards (QS) to help improve the quality of healthcare provided worldwide to those affected by axSpA. The ASAS task force, consisting of 20 rheumatologists, 2 physiotherapists and 2 people with axSpA, developed this set of QS using a stepwise approach; proposing 34 potential key areas for quality improvement, which were then commented on by 140 ASAS members and people with axSpA, leading to identification of 3 additional areas for consideration. Eventually, after much discussion, 5 key areas were determined as most important to determine quality of care: referral including rapid access, rheumatology assessment, treatment, education/self-management and comorbidities. Finally, nine QS were agreed on and endorsed by the whole ASAS membership. These 9 QS are outlined below. The aim is now to implement each of these quality standards at a national level, for local quality improvement. 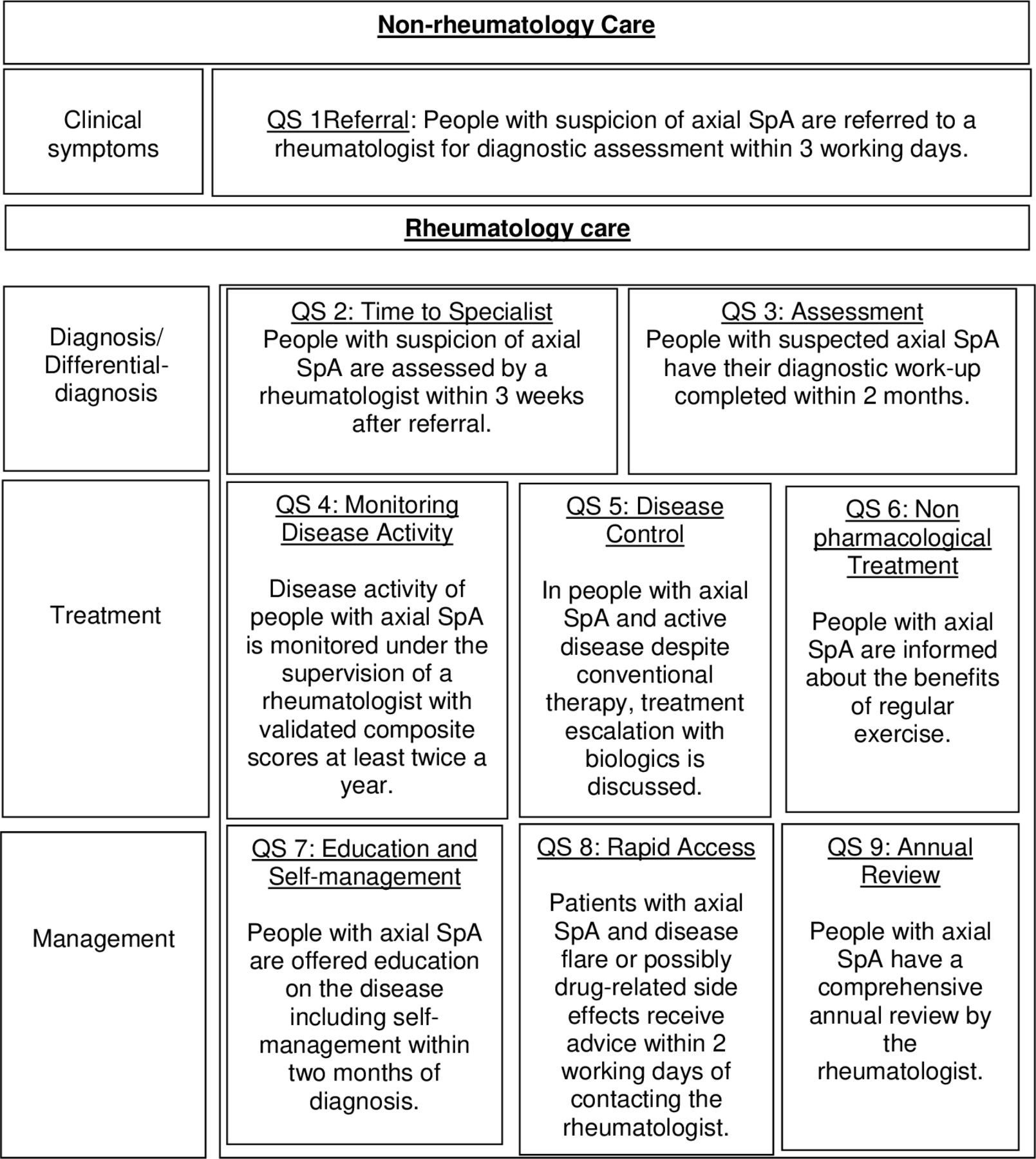 This article was in response to the recent publication of the American College of Rheumatology/Spondylitis Association of America/Spondyloarthritis Research and Treatment Network (ACR-SAA-SPARTAN) recommendations for the treatment of ankylosing spondylitis and nonradiographic axial spondyloarthritis, in Arthritis Rheumatology – https://doi.org/10.1002/art.41042.

The present article, very much focuses on the fact that the recommendations refer to non-radiographic (nr-axSpA) and radiographic axSpA (ankylosing spondylitis – AS) individually, rather than as a unified ‘spectrum’ of disease (as discussed in our previous blog post here: https://projectnightingaleorg.wpcomstaging.com/2019/10/17/axial-spondyloarthritis-what-is-axspa-and-how-does-it-relate-to-ankylosing-spondylitis/), in addition to discussing the recommendations in more detail. Important to note was the discussion regarding the ACR–SAA–SPARTAN recommendations rightly warning about the current limitations of MRI in disease monitoring (as touched upon above), particularly in view of the limited data available on the correlation between MRI lesions and treatment response or on the significance of subclinical inflammatory changes.

The authors conclude that: the 2019 ACR–SAA–SPARTAN recommendations provide an update for the rheumatology community with useful advice on how to manage axSpA and the use of new pharmacological therapies for this condition. Despite being formulated as if treating two distinct disease subsets (AS and nr-axSpA), similarities in the available evidence, including the treatment guidance devised, suggest that AS and nr-axSpA are indeed part of the same clinical entity and that management strategies should therefore be unified and aimed at the whole spectrum of axSpA. The integration of MRI in the evaluation of axSpA might be of value in some instances; however, research efforts are still needed to identify potential biomarkers and immune-phenotypes that could guide informed treatment stratification and our overall understanding of axSpA.

The following study involved analysing data from the British Society for Rheumatology Biologics Register in Ankylosing Spondylitis (BSRBR-AS) – thank you to those of you who contributed! The results confirmed that poor quality of life, high disease activity and poor function in people with axSpA, is independently influenced by sleep disturbance, mood and widespread pain – again highlighting these factors as key areas that should be targeted in the management of axSpA. Currently, sleep disturbance, mood and widespread pain are not acknowledged in European guidelines for managing the condition as targets to improve quality of life. However, there is an increasing amount of research highlighting the importance of these factors, including Project Nightingale, which will hopefully in the near future lead to an increasing focus on these aspects of the condition throughout the treatment process.

This article used an exciting new statistical method of analyses known as machine learning – a bit of a buzzword in the research space at the moment! The authors developed statistical models driven by data from people with axSpA that could, with reasonable accuracy, predict radiographic progression. Further modelling with data from more people could provide an exciting opportunity for the clinical translation of such predictive models to highlight and improve the treatment of people who are at high-risk of progression.

The following review summarised the current perspectives on physical activity and sleep in people with axSpA and the possible role of new, non-invasive technology (actigraphy) to measure sleep, to more accurately evaluate the impact of treatments on sleep and physical activity in axSpA. An actigraph unit is usually a small sensor worn on the wrist, which monitors and evaluates sleep in medical research – similar to a sleep measurement as taken on a FitBit, as many of you already use as part of Project Nightingale (interestingly, the FitBit Chare HR was recently suggested to be highly accurate in sleep evaluation when compared with actigraphy – see https://www.ncbi.nlm.nih.gov/pmc/articles/PMC5355016/). The current review reported the following key points:

This review really relates to Project Nightingale; which as you know, also collects data on sleep minutes in addition to step data if linking a wearable device to the uMotif app. In future analyses, this detailed information could provide, as detailed in the review, important novel insights into sleep disturbance in axSpA and potential drivers of such sleep disturbance and physical activity changes, in order to identify potential opportunities to improve sleep and physical activity. 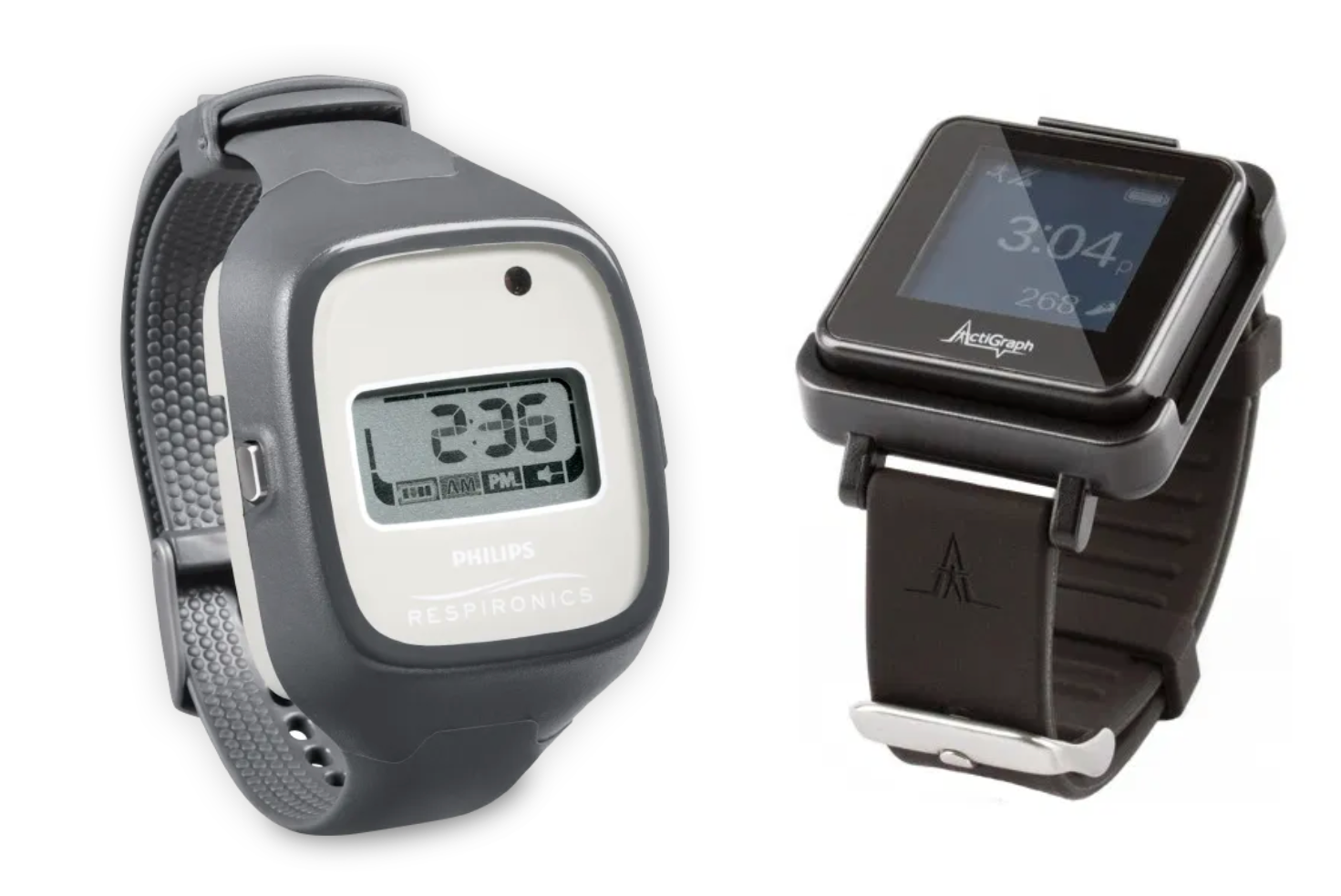 Have you noticed anything that particularly influences your sleep or physical activity, from participation in Project Nightingale or from use of your wearable device? If so, we would love to hear from you! Please email Rosie Barnett, a research assistant from the University of Bath if you would like to get in touch – rosie.barnett1@nhs.net.

If you made it to the end of the post then thank you for reading! Have a great week