Hi everyone, I hope you have all had a lovely weekend!

This is our second post in the 2-part December axSpA research highlights series: with the previous post last week presenting some of the recent research regarding axial spondyloarthritis (axSpA) and physical activity (https://projectnightingaleorg.wpcomstaging.com/2020/01/29/december-axspa-research-highlights-focus-on-physical-activity/).

The following post presents interesting articles relating to mental health in axSpA, the move towards updated trial designs in axSpA to include participants with non-radiographic axSpA (nr-axSpA), the potential benefit of comedication with methotrexate in axSpA, and a focus on stiffness.

Have you read any interesting articles last month that we have missed, and you think should be included here? If so, please get in touch at rosie.barnett1@nhs.net and we can add them to our page.

In October 2019, the article ‘_Comorbidity burden in axial spondyloarthritis: a cluster analysis_’ was published in the journal Rheumatology, authored by Zhao and colleagues. Zhao and colleagues found that the two most common comorbidities in axSpA were hypertension and depression; with people in the depression-anxiety and fibromyalgia-IBS clusters reporting poorer health and increased axSpA severity including worse overall quality of life, global health, fatigue and axSpA disease activity. These results highlight the importance of comorbidities in axSpA and will inform health professionals in the delivery of more patient-centred management of axSpA. Indeed, recent National Institute for Health and Care Excellence clinical guidance for SpA, rheumatoid arthritis and osteoarthritis all highlight the need for a holistic management approach, including addressing peoples’ psychological needs.

In the present article (a published comment on the above), Vandevelde and colleagues further highlight the need for an integrated approach to care provision, to adequately address physical and mental health in people experiencing mental health problems alongside chronic physical illness. Over an 18-month period, the authors conducted a survey across clinics within their care centre and identified that the most common reasons for referral to the clinical psychology department were low mood or anxiety, and difficulties in adjusting to or coping with illness and pain/symptom management. The authors then engaged with the clinical psychology team in order to quantify the need for a dedicated clinical psychologist working exclusively within the rheumatology setting.

Results found that there was an overall 50% reduction in psychological distress in people with axSpA referred to a clinical psychologist, following a clinical psychology intervention. The mean level of psychological distress (CORE-10 measure) scores reducing from moderate psychological distress to low levels of distress after treatment. The majority of people required between two and nine sessions to achieve this improvement. Crucially, the requirement for rheumatology follow-up appointments was reduced by a third (35%) in the cohort of 39 people who completed the intervention. In order to further characterise the possible need for a dedicated in-house clinical psychologist, a week-long survey (91 surveys returned) of rheumatology outpatient attendees showed that more than half appeared to demonstrate symptoms of anxiety, of which the majority had symptoms demonstrating moderate or severe anxiety and a third seemed to demonstrate symptoms of depression, of whom 60% scored in the range indicating moderate or severe depressive symptoms.

In line with the work by Zhao and colleagues, the results from Vandevelde and colleagues confirm that there is significant psychosocial comorbidity associated with chronic musculoskeletal disease in the rheumatology setting and that this can be successfully addressed with a short intervention with a specialised clinical psychology team. Furthermore, following intervention, the requirement for follow-up appointments reduced, reflecting a practical benefit to the intervention also. As highlighted by the authors, although it may be widely accepted that psychological assessment and intervention should be part of regular care of people with chronic musculoskeletal inflammatory conditions, at a global level the challenge remains to engage managers and commissioners in addressing this unmet need in order to ensure timely access to specialised mental health support for people affected by axSpA and other chronic inflammatory disorders.

Do we need new trial designs in spondyloarthritis? Seminars in Arthritis and Rheumatism, December. Landewé. https://www.sciencedirect.com/science/article/pii/S0049017219306511?via%3Dihub#!

Drug trials in ankylosing spondylitis (AS – see previous blog post regarding differences between nr-axSpA and AS https://projectnightingaleorg.wpcomstaging.com/2019/10/17/axial-spondyloarthritis-what-is-axspa-and-how-does-it-relate-to-ankylosing-spondylitis/) have resulted in many effective new drugs approved for the treatment of AS. Following the introduction in 2009 to new criteria for axSpA, thought of as a spectrum of disease, and the move towards capturing people with not only AS but early nr-axSpA, there is a need for the update of research trial designs to optimise drug testing and approval in a changed clinical environment.

Immediately following the new 2009 axSpA criteria, manufacturers of biologics drugs planned trials to further develop new drugs for the (expanded) indication of nr-axSpA. This approach has been very successful in Europe, in the jurisdiction of the European Medicines Agency (EMA), but has stagnated in the United States (Food & Drug Administration (FDA)) because of concerns about the character of nr-axSpA and the natural history of the condition, in addition to fear for an explosion of biologics prescriptions for patients with non-inflammatory back pain conditions. The issue was solved only recently (March 28, 2019) with the approval of the biologic certolizumab for the indication of nr-axSpA in the US after the successful completion of a 1-year placebo-controlled trial in nr-axSpA patients.

In the present paper, Robert Landewé discusses the need for consistent research trial design in axSpA (including suggested additional inclusion criteria such as inflammatory findings on MRI or increased CRP) to improve predicted drug response and suggests that optimal response measurement will improve statistical power (contrast), allowing for smaller trials, and facilitate comparison across trials. Finally, these new trial design features will trickle down to clinical practice and help reduce overdiagnosis and overtreatment of axSpA.

Should we combine biologics with methotrexate in axial spondyloarthritis? Autoimmunity Reviews. December. Poddubnyy and colleagues. https://www.sciencedirect.com/science/article/pii/S1568997219302095?via%3Dihub

Historically, the benefit of a combination therapy of biologics and methotrexate is based on clinical trials and real-life experience in people with rheumatoid arthritis and an inadequate response to methotrexate. However, whether this concept can be transferred to the management of other inflammatory diseases such as axSpA, is still under debate. The following article discusses the evidence for and against the use of combination therapy in axSpA. 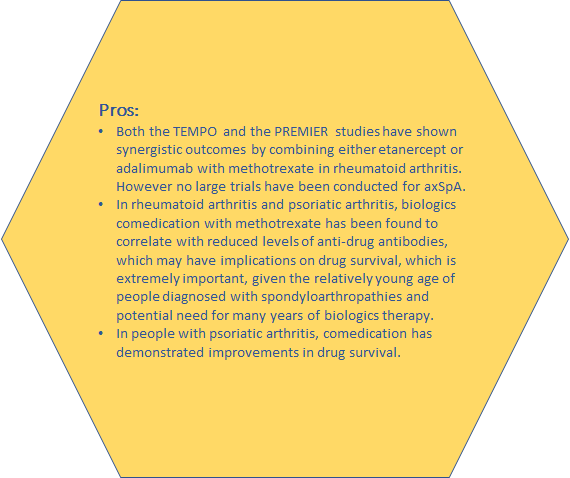 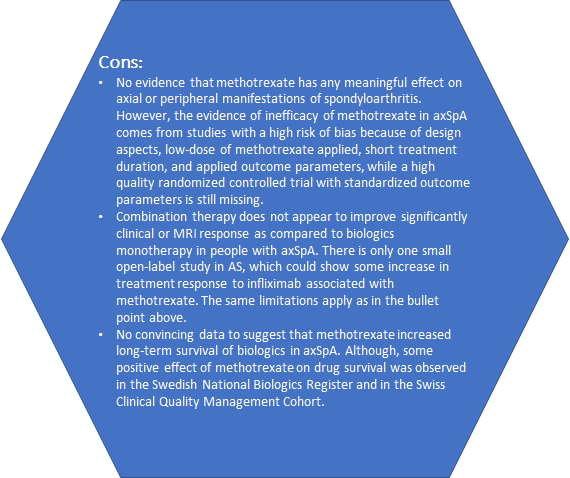 Insufficient attention has been paid throughout the years regarding the optimal regimen of biologics. This issue has not been properly addressed in the major clinical studies nor have the best agents for comedication been determined. It seems that comedication may prevent the generation of anti-drug antibodies in patients with spondyloarthropathies, similarly to their effect in patients with rheumatoid arthritis. Utilising such an approach may prolong biologics drug survival. However, more work is needed in this area and more evidence needed before significant conclusions can be drawn.

The mediating role of pain and function in the association between stiffness and quality of life in patients with axial spondyloarthritis. Seminars in Arthritis and Rheumatism, December. Kwan and colleagues. https://www.sciencedirect.com/science/article/pii/S0049017219300022?via%3Dihub

Despite the impact of stiffness in axSpA, there are few interventions that have been developed to address stiffness specifically. This may be because it is unclear how stiffness may be related to quality of life (QoL), in addition to a lack of dedicated and validated measure for stiffness in axSpA. The relationship between stiffness and QoL was assessed in the present study; whereby more stiffness, more pain, decreased function were associated with poor QoL. Function was associated directly with QoL. Stiffness was associated with QoL through both pain and function. Optimization of QoL in people with stiffness in axSpA thereby requires effective control of both function and pain. Furthermore, currently, stiffness is measured as a single item as part of a composite scale such as BASDAI, Ankylosing Spondylitis Disease Activity Scale or the ASAS Health Index. Dedicated PROMs should be developed and validated so that stiffness can better be measured in axSpA.

If you made it to the end of the post then thank you for reading! Have a great week